John Cimino Jr. left us far too soon when he passed away suddenly in May 2020. We honor his legacy by continuing to care for our community. 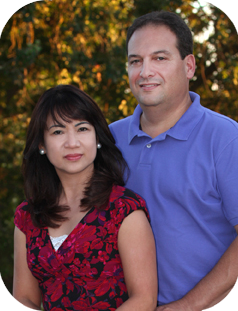 The owners – Caregivers of Land Park: John F. Cimino Jr. and Rangi Paula Giner not only shared a vision of the special care center for the elderly called The Meadows at Country Place, but also shared a vision to extend the same compassionate care for the elderly living at home. They always thought of supporting the elderly and their families within their neighborhood in the Land Park, Pocket and Greenhaven areas. With this shared thought, Caregivers of Land Park was formed. John and Rangi’s creation of both visions have always been guided by compassion and a genuine concern for others.

Mr. Cimino had deep roots in assisted living services and caring for the elderly. He helped his parents build their first 6 bed facility for the family business in 1988, and  constructed many other assisted living homes since then.

Ms. Giner has always been about heart and compassion, caring for and helping people. Her parents modeled that behavior and attitude throughout her childhood and into adulthood. Her physician father ran a small clinic which was attached to their home in a small town in the Philippines, where she was raised. By the time she was in high school, she and her siblings started assisting both their father and mother (a dentist herself), in the care of patients. Core values such the absolute necessity of cleanliness, an instilled spirit of generosity, an abiding respect for elders and integrity were ingrained in her very fiber.

Those intrinsic ideals laid the foundation for Ms. Giner’s very clear path in life. She amassed extensive training, as well as experience, through the years. Having acquired a Bachelor of Science in Nursing, she spent nineteen years working as an emergency room nurse in the Philippines and Saudi Arabia. After that, she spent 10 years working with elderly and mentally challenged individuals, in nursing homes, long term care communities, and in the places they call home. She is continuing to invoke her parent’s values by sharing and providing that compassionate care in her neighborhood.

Caregivers of Land Park, The Meadows at Country Place and
The Waterleaf – A Model Without Peer.

Owners – Caregivers of Land Park: Paul and Sally Cimino also shared in the vision of a way to be of service by giving quality in-home care in their neighborhood through Caregives of Land Park, as well as their own assisted living facility – The Waterleaf.

Growing up, Paul Cimino’s mother, Wilma, had provided care for an elderly neighbor. Being raised in that atmosphere of being attentive to the needs of the elderly provided an impetus for the direction his career would later take.

After an honorable discharge from the U.S. Marine Corps in 1992, Paul graduated from Pacific Union College in 1993 with a B.S. degree in Public Relations. However, throughout the period from 1988 to 1996, he also provided care giving and maintenance support to his family’s emerging assisted living business that had started from his Mother’s help provided to a neighbor.

In November of 2001, Paul and his wife, Sally, left his family’s business to team up with Mike Williamson. Together they started The WaterLeaf at Land Park where Paul still serves as administrator.

Paul and Sally have three children, Vanessa, Paul Jr., and Vienna, and currently live in the Greenhaven area of Sacramento. Paul enjoys occasional scuba diving and recently served as the president of the marching band booster club for Kennedy High School where his son played the trumpet. Sally oversees the activity program at The WaterLeaf as well as general facility operations.

Providing Seniors the assistance they need, in the comfort, convenience and security of their own home.

*We serve within the Land Park, Greenhaven and Pocket Neighborhoods.

Call us today for a Free
In-home consultation!